Reblogging here something by my daughter Larisa Joy Reilly Thomas, posted today on her blog “Roots of Kinship”. Great little family story about one of my favorite songs from my teen years, which took on family significance far exceeding the musical quality of the song!

Despite its rather unusual subject matter, The Battle of New Orleans won the 1960 Grammy for Best Country & Western song and was 1959’s #1 song on the Billboard Top 100 — see:

Johnny Horton had several other hits with unlikely subjects, including “Sink the Bismarck”, about the British Navy’s efforts to sink the German battleship Bismarck in World War II; “Comanche”, about the horse Comanche, which was the sole survivor of the Battle of the Little Big Horn and Custer’s Last Stand; and “North to Alaska”, about the 1896 Alaskan gold rush. 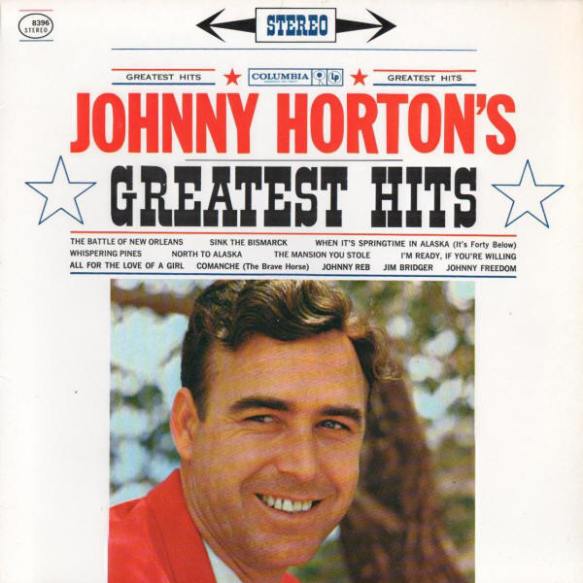 Sadly, Horton was killed in an automobile accident on November 5, 1960, near Milano, Texas. Like several others of my favorite singers (including Buddy Holly, Ritchie Valens, the Big Bopper and Eddie Cochran) he left us too soon.

Thanks, Kiddo, for this trip down memory lane!

Battle of New Orleans. By Edward Percy Moran. [Public domain], via Wikimedia Commons In 1959, Johnny Horton earned a number one hit on the Billboard Charts for the song The Battle of New Orleans.  Written by Jimmy Driftwood, it commemorates the victory of the United States over the British Army at the end of the War of 1812.1

All of this is to set the background of a song that played a significant role in my childhood.  When my father was overseas in the US…

… the second of this week’s major rock & roll anniversaries was on Friday, February 7th … the 50th anniversary of the arrival in the United States of … the first wave of the “British Invasion” … THE BEATLES.

Rolling Stone Magazine: The Beatles Arrive in the U.S.

The Beatles, of course, changed rock & roll forever … and in the process profoundly changed the United States in ways the consequences of which continue to this day.

John, Paul, George & Ringo … last names not necessary … came to the U.S. while the country was deep in mourning over the then recent assassination of President John F. Kennedy  … and provided, at least for the younger generation of Americans, a welcome diversion from the melancholy which had gripped the country.

Because I was in the midst of “gloom period” (the post-Christmas leave, mid-winter period of cold, snow & early darkness) of my plebe year at West Point, I was not a spectator … either directly or even by way of television … at the arrival of the Beatles.

But, thousands of Americans … mostly teenagers or journalists … greeted the band on its arrival at the recently renamed John F. Kennedy Airport in New York City.

After their arrival, the Beatles participated in a press conference with New York disc jockey Murray Kaufman … “Murray the K” … who came to refer to himself as “The 5th Beatle”.  Kaufman hosted the “1010 WINS New York” evening time slot … and was (along with Bruce “Cousin Brucie” Morrow) one of my favorite DJ’s of the rock & roll era.

The Beatles went on to make American television history with their first appearance on the Ed Sullivan show on February 9th … with 73 million viewers … a staggering 40% of the total American population … and the largest recorded TV audience for a single show ever up to that time.

Like many young Americans, I bought every Beatles album as it was released … at least until I graduated from West Point … at which time I unwisely sold most of my record albums, including all of my Beatles albums, to underclassmen.

Although I was never as much a fan of the Beatles as I was of others who they credited with making their success possible … including Buddy Holly, Bob Dylan and Elvis Presley … and did not like most of their post-1966 recordings … I do, to this day, enjoy their early recordings … such as … 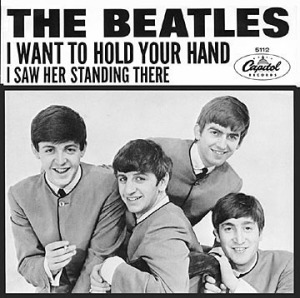 “I Want to Hold Your Hand” … “Love Me Do” … and “I Saw Her Standing There” … which provided temporary relief from the drudgery of life as a West Point plebe … and which still bring a smile to my face when I hear them.

The Beatles on Wikipedia:

The Beatles arrive in the U.S. on Wikipedia:

How popular were the Beatles albums?


… this week marks the anniversaries of two significant events in the history of rock ‘n roll … the first of these was this past Monday, February 3rd … the 55th Anniversary of “The Day the Music Died” …

… on that date in 1959, Buddy Holly, Ritchie Valens and J.P. “The Big Bopper” Richardson were killed in the crash of a small plane near Clear Lake, Iowa. 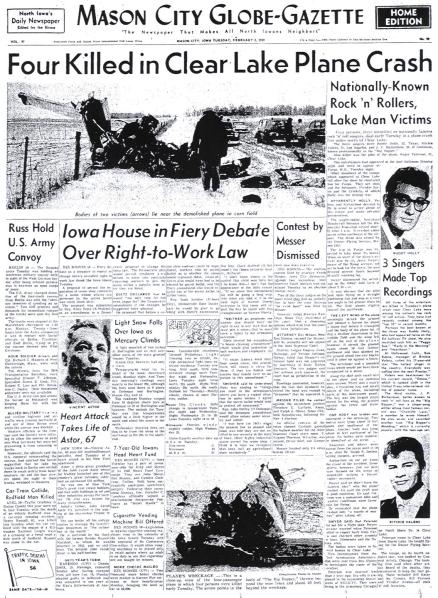 Buddy Holly was … and to this day remains … my favorite rock ‘n roll artist. The song which made famous the line “The Day the Music Died” … “American Pie” by Don McLean … is my single all time favorite song.

I was fortunate to have grown up on Long Island … and to have attended a 1958 Alan Freed rock ‘n roll show at the Paramount Theater in New York City …  Buddy Holly & the Crickets appeared in that show, along with many other 1950’s rock ‘n rollers … I was also a newspaper carrier boy … delivering the Long Island Daily Press for any other old-timers who still remember that now defunct paper … and learned of the crash when I picked up my papers to deliver the next day.

Most music fans probably know of the two movies that have been made about the lives of Buddy Holly … “The Buddy Holly Story”, starring Gary Busey, Don Stroud & Charles Martin Smith … and Ritchie Valens … “La Bamba”, starring Lou Diamond Phillips and Esai Morales … I keep hoping that someone will make a movie about the third rock star victim of the crash … “The Big Bopper” … so as to make a complete set.

There is also an excellent documentary movie called “The Real Buddy Holly Story” … hosted by Paul McCartney … who says that Buddy Holly was a seminal influence on The Beatles and their music … And, I also have two books on Buddy … the very readable “Rave On” by Philip Norman … and the almost scholarly “Buddy Holly, A Biography”, by Ellis Amburn.

For internet articles on the three artists, see:

The Big Bopper on Legacy.com: